Three Lessons About Friendship from a Toddler

Yesterday, my two-year-old daughter and I walked to our neighborhood Walmart, which is a block and a half from our home in Washington, D.C.  While we were in the meat department, Renee noticed an elderly lady in an automated wheelchair, but the woman didn’t see us because we were behind her.

The woman turned around, her face lit up, and she said, “Well, good morning to you.”

“Oh, I don’t know,” said the lady.  “I’ve got 29 grands and 28 great-grands – they’re everywhere.  But some of them are at my house right now, and I’m here early so I can fix them some breakfast this morning.”

“Do they play at your house?” asked my daughter. 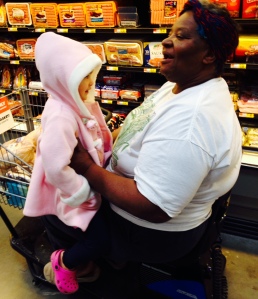 “Oh, yes they do,” said the lady, who introduced herself as Miss Maxine.

I felt very comfortable with the lady by this point, so I told Renee she could give Miss Maxine a hug goodbye if she wanted.  Instead, Renee walked up to Miss Maxine’s wheelchair, climbed it, got into the woman’s lap, threw herself onto the woman’s chest, and wrapped her arms around her.  Then Renee just sat back and beamed at Miss Maxine, who couldn’t stop laughing at this friendly kid who wanted to be close to her.

There are a lot of people out there who struggle to make new friends, and my daughter is obviously not one of them.  But for those who do have trouble connecting to others, I think Renee can teach us some lessons about how to do it successfully:

1.  My daughter didn’t get insecure when the lady didn’t reciprocate at first – she persisted.  When Miss Maxine didn’t hear Renee saying “hey” to her, Renee didn’t give up or get her feelings hurt.  She stood there patiently waiting
for the woman to turn around.  So many of us try to make friends with adults who don’t call, text, or email back; and instead of assuming the best about their failure to communicate, we get all insecure and decide to pull away before a friendship even gets a chance to develop.

2.  My daughter wasn’t afraid to befriend someone who was different from her.  When Renee saw Miss Maxine, she didn’t see a heavy-set woman of a different race driving an automated wheelchair – she saw a grandmother, and she wanted to be friends with her (and probably all her grands and great-grands too).  Insecure adults don’t know how to be around people who look, think, or believe differently than they do; they stay focused on the differences and then feel like they either have to change the person or reject them.

3.  My daughter made it her business to love.  Not only was Renee willing to approach a stranger who was different from her, when the lady finally spoke to her, Renee began loving the woman in one of the most effective ways possible: she showed genuine curiosity about her.  She asked where Miss Maxine’s grandchildren were and whether they played at her house.  Watch adults interact, and you’ll notice how often we tend to blabber on about ourselves, rather than studying the person across from us like Renee did.

Now I should add one detail to the story that I left out: after Renee climbed onto Miss Maxine’s lap, Miss Maxine talked about the importance of making sure to only be friendly with people who are safe.  My daughter needs that warning – most adults don’t.

They need to get past the insecurities that crop up when people don’t reciprocate; they need to keep an eye open for unlikely friendships with people who are different. They need my daughter’s courage, her curiosity, and most of all, they need her willingness to love.